Humans have always wanted to decorate themselves and the objects they have used. Colours and dyeing have been one method of decoration. With the help of plant dyes and bark, one can dye reindeer leather, fabrics, wool and yarn. The plants that are used for dyeing are dried first and then simmered in water. Wool, cotton and linen yarn – either white or grey – are suitable for dyeing with such dye-stuffs. Woollen yarn needs to be washed, rinsed and treated with a mordant before the dyeing, so that the colour will stick to the yarn.

Fishing nets were earlier improved by dyeing them with the bark of an old birch or a birch root, black tinder fungus and salt and ash. Out of them, people simmered a dye liquid in which the nets were soaked. This way, the nets turned brownish.

To get yellow, the Sámi used the heather and the flowers of the lady’s bedstraw and the northern bedstraw, the young leaves of the mountain birch and the dwarf birch, sorrel roots, the alpine club moss and the ground pine (ssp. complanatum) and many lichens, as well as juniper panicles and the shrubby sunburst lichen. An especially fine shade of the yellow colour was achieved by simmering a dye out of ground pines and birch leaves. Sometimes, ground pines were boiled with heathers. Ground pines were not only used in summer, as they could be collected from under the snow, too. When still fresh, they were put into a copper kettle together with the yarn that was to be dyed, and the mixture was boiled for an hour. The result was a dark yellow that stuck well to the yarn.

The Sámi preferred to buy the red yarn that they needed, but if this was impossible, they dyed the yarn themselves. The roots of the northern bedstraw – that were dug from the ground with the help of a stick – were the most important source of red. The roots growing in damp soil were avoided, as the colour they produced was considered too dark. On the other hand, bedstraws growing in the midst of bushes had too fine roots, which gave a very weak colour. First, the yarn was dyed yellow by simmering it in a mixture of water and bedstraw flowers. After this, the yellow yarn was dyed red with the help of bedstraw roots. Presumably, the Sámi have adopted the use of the bedstraw, as well as the Sámi name for the plant, from the Finns.

At least in Swedish Lapland, the Sámi sometimes used the root of the tormentil for dyeing wool red. However, it was more common to dye skins with the tormentil. In that case, the root was chewed and the skin was brushed red with the spittle that had turned red. Skins were also tanned reddish with alder bark. In addition to domestic dyes, the Sámi had access to madder, or alizarin (the dried and chopped root of the madder).

The crottle, or skull lichen, was the source of reddish brown. The best lichens grew on rocks that were surrounded by water. Heather, too, could be added into the dye made from the crottle.

Bearberry shrubs were a source of brown and grey. By mixing grey and black wool, it was possible to get different shades of grey and brown naturally, so it was not always necessary to dye wool at all.

The only way to obtain blue was to use a dye called indigo. It was prepared in Central Europe from the local dyer’s woad or from the indigo plants that were imported from the tropics. The indigo was sold in the form of balls or lumps, which were soaked in human urine before the dyeing. Green was achieved by adding indigo into a yellow dye made from native plants. Thanks to trade indigo has been available for the Sámi already for hundreds of years.

Almost all natural dyes – with the exception of indigo – need to be fastened to the textile fibres with the help of metallic salts. The most common ones of such mordants are ferrous and copper sulphate and alum (a double salt that contains aluminium). The sulphates were not necessarily needed, if the dyeing was done in a cauldron that had become corroded and provided the dye with some iron or copper. The iron gave the colours a tinge of grey and the copper a tinge of green. Alum, again, kept the colours bright, but it had to be purchased. In Sweden, alum has been manufactured industrially ever since the 1600s. It is possible that the Sámi used ground pines to replace alum, as the plants are rich in aluminium.

The Sámi have especially used willow bark for tanning leather and hides. Clothes, accessories, bags and pouches are sewn from reindeerskin – hairless reindeer hide – that has been tanned with willow bark. Birch bark is also used for colouring and tanning craftwork made from reindeerskin and leather. Birch makes the reindeerskin browner than willow but also harder. Birch bark was in the old days also used for dyeing wool yarn and fishing nets, and for decorating woodwork. Earlier, the dye was attached with the help of ash; later, chemicals have been used. 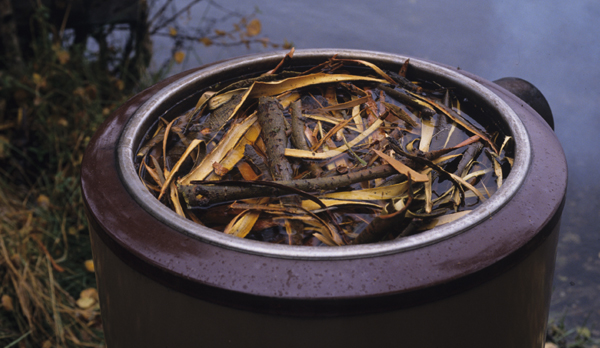 Bark in a pot

Fishing nets were earlier improved by dyeing them with the bark of an old birch or a birch root, black tinder fungus and salt and ash. Out of them, people simmered a dye liquid in which the nets were soaked. This way, the nets turned brownish. 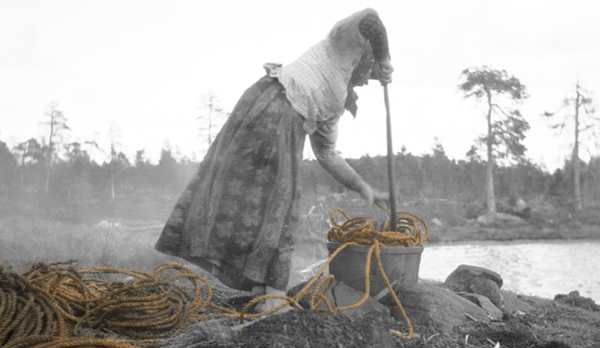 Dyed rope which is made of roots 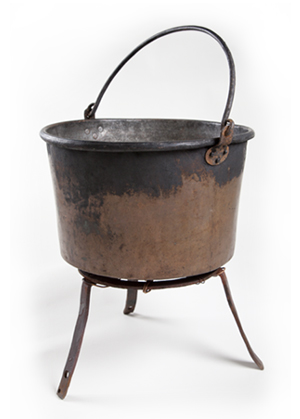